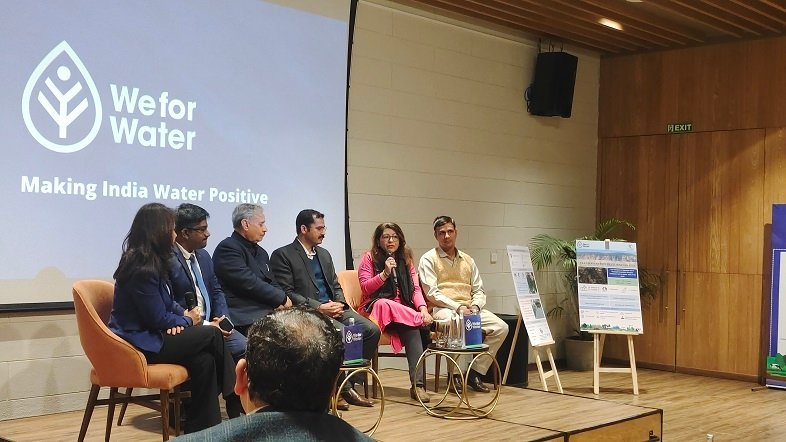 Gurugram, 12th January 2023: Abhipsa foundation organized an event in Gurugram to announce their global initiative called “WeforWater”. The movement aims to create and support national water projects and improve water security in India. Union Minister and MP of Gurugram, Shri Rao Inderjit Singh, graced the occasion along with Shri. Vishram Meena, Additional Deputy Commissioner of Gurugram, in the presence of more than 100 people from corporate, media, civil society, and most importantly, people of Gurugram.

To avert Gurugram’s unexpected water crisis, groundwater replenishment is critical. WeforWater is trying to draw attention to the importance of having water in the pipes and taps. And the event held on 11th January wanted to share the crisis details with the people of Gurugram and invite them to commit by sharing their resources and time to maintain the 11 ponds, which have been rejuvenated in the last three years by GuruJal and another 36 ponds that require interventions.

Water conservation has been the need of the hour, and through this initiative, the primary aim is to raise awareness amongst the residents of Gurugram. The city will generate and support water-related policies with the help of the local community, industry, government, and citizens.

By bringing people, politicians, and businesses together, 2023 will bring about changes in time, health, and awareness of the implications of water literacy for children and occupants. Speaking at the event, Ashish Kapur, Vice-chairman of Abhipsa Foundation, said, “WEFORWATER aims to prevent “Day Zero” and make India water-positive by 2040, and we are specifically focusing on identifying many areas that provide the economic benefits with minimum funding and creating the greatest impact on addressing water-related concerns”.

Shri Rao Inderjit Singh, Union Minister, and Gurugram MP, at the occasion, said, “With the onset of the new year, I would like to encourage every individual to commit towards a water management ecosystem. We look forward to promoting the same with the help of various new projects and programs. This mission provides the functionality of effective and safe water use which every citizen, individual, and corporates can follow for a better India.”

The #WeforWaterGurgaon movement was started to use technology to influence groundwater recharge. The goal is to ensure that natural resources are well-preserved and their benefits are equitably accessible to all.