Household spends have increased for 62% of families, 18% plans to buy or exchange discretionary products like AC/Fridge this summer season – according to Axis My India – CSI

Mumbai, 4th April 2022: Axis My India, a leading consumer data intelligence company, released its latest findings of the India Consumer Sentiment Index (CSI), a monthly analysis of consumer perception on a wide range of issues. The period of March reveals a significant improvement in consumption across household products. Sentiments associated with mobility highlight marginal improvement while sentiments associated with media consumption remain the same as last month. At an overall level, Consumer sentiment is at its highest in the last one year.

The April net CSI score, calculated by percentage increase minus percentage decrease in sentiment, was up/down to +19, from +9 last month and reflecting the highest increase in the last one year.

The surveys were carried out via Computer-Aided Telephonic Interviews with a sample size of 10086 people across 36 states. 67% belonged from Rural India while 33% belonged to urban counterparts. In addition, 63% of the respondents were male while 37% of the respondents were female. In terms of regional spread, 24% and 21% belonged to the Northern and Southern parts of India while 25% and 30% belonged to the Eastern and Western parts of India. In terms of the two majority sample groups, 31% reflects the age group of 36YO to 50YO and 27% reflect the age group of 26YO to 35YO.

Commenting on the CSI report, Pradeep Gupta, CMD, Axis My India, said, “With mounting geopolitics tensions, opening up of economies and diminishing fear of Covid-19, Indian consumers are showcasing confidence and overall sentiment is at the highest in last one year. While they are seeking out every new information with the help of the ever-increasing penetration of the internet, a majority of the population still relies on traditional media such as television to seek the accuracy of this information. Even the government’s decision to abstain from voting resonated with the country’s sentiment basis welfare and security concerns of the Indian community in Ukraine and awareness of long-standing political and strategic ties with Russia. Increasing expenditures across categories, domestic travels and coming together for IPL further captures the sentiment of an optimistic consumer. It reflects their intent for improved life and lifestyle.

· Overall household spending has increased for 62% of families which reflects an 8% increase from the last month. The net score which was at +43 last month as increased by +10 to +53 this month.

· Spends on non-essential & discretionary products like AC, Car, and Refrigerator has increased for 13% of families reflecting an increase of 5% from last month. Spending nevertheless remains the same for 82% of the families. The net score has improved to +8 this month as compared to +3 in the previous month.

· Consumption of health-related items more or less remains the same for 46% of the families, while decreased consumption is witnessed among 16%. The health score which has a negative connotation i.e., the lesser the spends on health items the better the sentiments, has a net score value of -22 this month.

· Consumption of media has increased for 22% of the families reflecting the same as last month. Consumption remains the same for a majority of 55% of families. The overall, net score which was at +1 in the last month is -1 this month.

· 89% of families said that they are going out the same for short vacations, malls and restaurants. Increased travel is reflected only among 6% of families, an increase by +1 from last month. The overall mobility net score is at 0.

On topics of current national interest:

· Axis My India further evaluated consumers’ views on the Russian invasion of Ukraine and the crisis that followed. Gauging consumers’ view on India’s stand, the survey discovered that 55% believe that India was right in not criticising Russia over the invasion of Ukraine. This reflects the countrymen’s confidence in the governments to take decisions based on national and strategic interest

· Catching the excitement and thrill around the IPL, the survey discovered that a huge 33% will be watching the season on television at home or outside (mall/pub/friends’ place) while 10% showed interest in digital viewing. Only 2% reported enjoying the match live from the stadium. Marketers are thus expected to park a huge percentage of their ads on Television and Digital platforms being the most preferred medium as per the survey.

· Assessing consumers’ views on buying non-essential summer-related products, Axis My India’s survey found out that 18% are planning to buy air-conditioners/fridges or replace an old one this summer season. However, 65% are still maintaining caution

· The CSI – Survey furthermore captured consumers’ views on summer vacation/holiday plans. 13% are considering domestic travel while only 1% is looking to go for an international trip. A majority of 84% is still averse of major travelling for leisure.

· In an attempt to understand consumer’s behaviour on information seeking, Axis My India discovered that 60% depend on the internet while seeking new information. However, 41% report Television as the most trusted source of information followed by digital medium– the view of 33% and print – the view of 22%. This draws an interesting correlation between the nature of the medium and the kind of need it fulfils of a consumer. While Digital caters to urgency, television caters to the accuracy and honesty needs of the consumer seeking information. 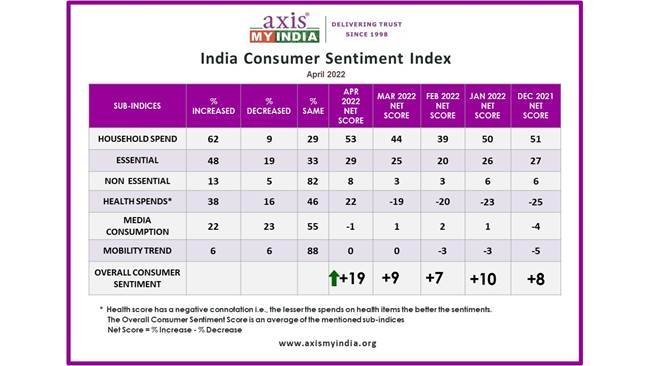 An evening with classical dance and music on 26th May 2022

Covestro India Supports The Ankleshwar Community During The Pandemic