New Homes sales grew by 50%, new supply by 101% in 2022 on the back of positive buyers’ sentiment: PropTiger.com report

Mumbai, 29th December 2022: Residential real estate sales in India have breached 2021 levels by far, witnessing a 50 per cent YoY growth. New launches further strengthened during 2022 and registered a growth of 101% YoY with a total of 4,31,510 new homes launched during the calendar year 2022, said the latest report by PropTiger.com, the country’s leading online real estate brokerage company.

According to the report titled Real Insight Residential – Annual Round-up 2022 (January – December), a total of 3,08,940 units were sold in 2022 as compared to 2,05,940 units sold in 2021. The figures include the sales numbers for all four quarters in both calendar years for the top eight cities including Ahmedabad, Bangalore, Chennai, Hyderabad, Kolkata, Delhi-NCR (Gurugram, Noida, Greater Noida, Ghaziabad and Faridabad), MMR (Mumbai, Navi Mumbai & Thane) and Pune.

A total of 4,31,510 units were launched in 2022 registering a sharp growth of 101 per cent YoY as against 2021. New launches witnessed a multi-year high, registering a 6 per cent increase as compared to 2015 levels. Mumbai has been the frontrunner in terms of new supply in 2022, taking a share of 39 per cent in the overall launches, followed by Pune and Hyderabad which took a share of 18 per cent and 19 per cent respectively.

This improvement in key growth metrics for the sector, the second-largest employment generator in India after agriculture, could largely be attributed to improved consumer sentiment on the back of renewed importance of home ownership during the pandemic, and sustained economic recovery post-pandemic.

The data and insights for 2022 suggest that demand has grown both sequentially and yearly in all four quarters of the year. The western markets Mumbai and Pune continued to show maximum traction, taking a combined share of 56 per cent in overall sales in 2022.

A large chunk (26 percent) of the sales were concentrated in INR 45—75 lakh price range. Notably, the share of units in the more than INR 1 crore price bracket has been growing continuously. This price bracket took a share of 22 per cent in 2022, the highest in a decade. In 2022, 21 percent of the units sold were ready to move in while the remaining 79 per cent were under construction.

In Q4 2022, residential demand was at par with the pre-pandemic levels of 2019. With 80,770 units sold in the final quarter of 2022, the demand registered 19 per cent growth over Q4 2021. While the hike in property prices and interest rates have slowly begun to outweigh positive homebuyer sentiment to an extent and are expected to have a short-term impact, the overall consumer outlook continues to remain positive. 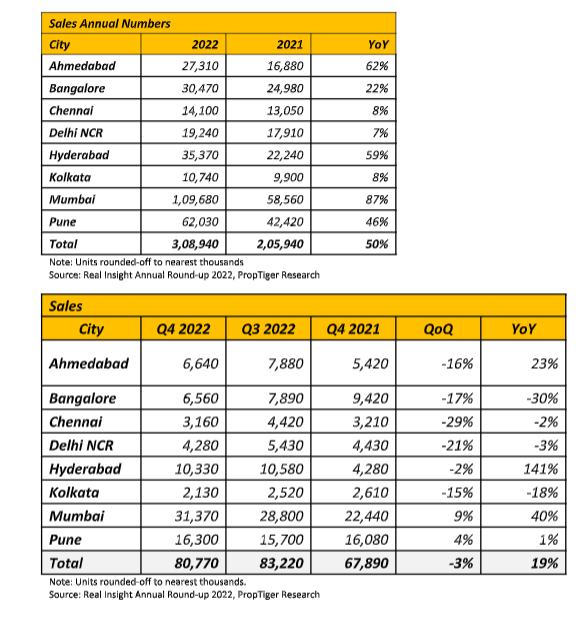 Buyer sentiment driving new launch wave
The visible change in approach towards home ownership amongst consumers in the aftermath of the pandemic, has infused confidence in the stakeholders and encouraged real estate developers across top cities of India to launch new projects throughout 2022.

Maximum new supply in 2022 was concentrated in the INR 1—3 crore price bracket, taking 28 per cent share in the total launches. Units in the INR 45—75 lakh price range took a significant share as well (27 per cent).

“Despite the industry’s numerous challenges, housing sales have rebounded strongly this year. It is worth noting that the industry is seeing higher demand and favorable sentiments. Despite the steady climb in home loan interest rates, customers have been interested in locking in lower prices rather than fretting about mortgage interest rates, which is also evident from our Consumer Sentiment Survey which indicated that homebuyers have been positive about the economy and their future earnings throughout 2022.” said Vikas Wadhawan, Group CFO, Housing.com, Makaan.com & PropTiger.com.
“It is important to note that we have seen strong growth across segments, including housing, office, retail, warehouse, data centers, co-working, and co-living. In the post RERA world, NRI demand for Indian property has also increased and given a boost to tier – II markets also.”, added Mr. Wadhawan.
Mr. Wadhawan further added “Significantly higher launches in this quarter also indicate that developers are gearing up for the strong quarter of Jan to Mar which is generally the biggest quarter from a sales perspective.”
Ms. AnkitaSood, Head of Research, PropTiger.com, Housing.com & Makaan.com said, “2022 has ended with a thumping note for residential realty, and this is only the beginning of the much awaited up-cycle which is being witnessed after a decade. Demand is primarily driven by strong end-users’ interest and the year saw a 50 per cent jump in sales over the previous year signaling the confidence revival in the market.”
Ms. Sood further added, “If we look deeper into cities, western metros of Mumbai and Pune continue to lead the demand, capturing an impressive share of 56 per cent in the annual sales tally in 2022. Hyderabad has fast picked up and outperformed its southern counterparts Bengaluru and Chennai. Residential realty outlook for 2023 remains cautiously positive, given the global macroeconomic environment and the uncertainty over spread of the new variant, Report added.”
End-user demand and premium charged over RTMI property push property prices up across top cities
Global rise in inflation throughout 2022 has added upward pressure on prices. That coupled with the premium being charged over ready-to-move-in residential units has pushed prices for new supply and existing inventory across top cities of India by 7 per cent YoY at the end of 2022. While the weighted average price across cities has appreciated in the range of 5-13 per cent, they have risen at a higher rate in key micro markets of major cities. 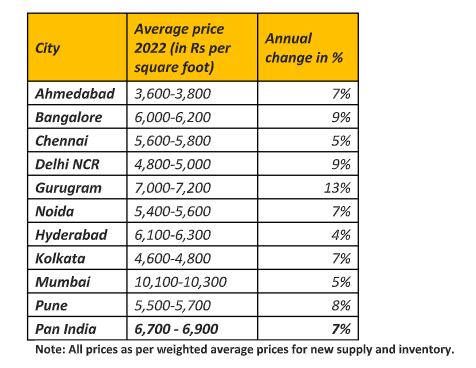 Inventory overhang at its lowest since 2020
The real estate sector bounced back strongly in 2022, with the resumption of economic activities in full swing. The improvement in sales in 2022 has been instrumental in lowering the inventory burden for India’s real estate developers. Consequently, inventory overhang — the estimated time builders would take to sell off the existing unsold stock, based on the current sales velocity— has now declined to 33 months as compared to 42 months in 2021. The inventory overhang is the lowest since 2020.
The unsold inventory stood at 8.49 lakh by the end of 2022 with 80 percent of this stock under various stages of construction. Out of the available stock in the top-8 cities, nearly 20 percent of the unsold units fall in the ready-to-move-in category. Pune, Kolkata and Chennai have the lowest inventory overhang of 26 months, whereas, Delhi NCR continues to have the highest inventory overhang of 61 months. 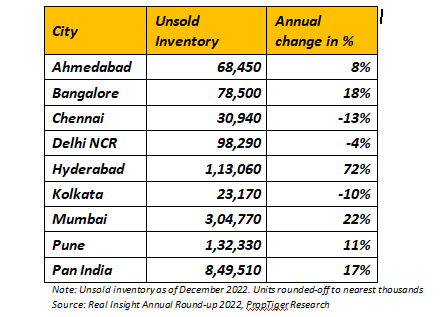