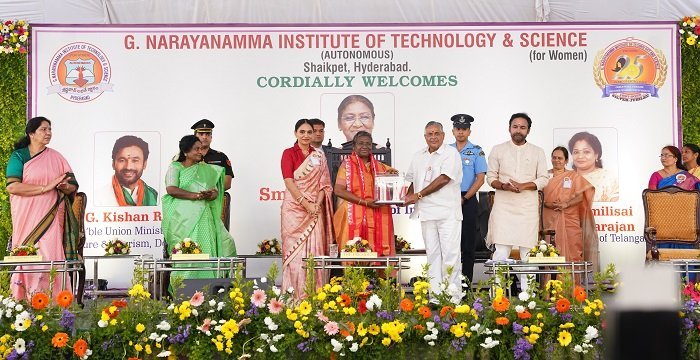 Hyderabad, Dec 30, 2022: The Honorable President of India Smt. Droupadi Murmu graced and addressed the G Narayanamma Institute of Technology and Science students at Shaikpet, Hyderabad on the occasion of the college’s silver jubilee anniversary and as part of Government of India’s Azadi ka Amrit Mahotsav.

The President when addressing the gathering quoted, “a society where women empowerment is encouraged at every level in a true sense can be considered to be a modern, developed and just society.”

During the address, Mr. Subba Reddy said, “G Pulla Reddy Garu with a holistic vision of bringing more women in STEM 25 years back started the first women’s engineering college in Telangana & AP and now we are proud to host the Honourable second woman President Smt. Droupadi Murmu on the occasion of our silver jubilee anniversary. We all have a role to play when it comes to breaking down barriers that prevent more women from thriving. So let’s all commit along with the Honourable President to doing our part and ensure every woman and girl has a better chance to make history.”

Ms. Srividya Reddy remarked that, “GNITS has a very strong alumni network of 18,000 GNITians who are now leaders and eminent professionals in big corporates, research organizations and government bodies. The talented research faculty of GNITS has been actively working with Department of Science and Technology, Government of India under initiatives such as TIDE (Technology Interventions for Disabled and Elderly) Program and Device Development Program (DDP). GNITS has been selected under the Atal Innovation Mission of the Government of India to establish the Atal Incubation Center (AIC), which will focus on developing deep tech innovations by women in the STEM segment. Taking inspiration from the Honourable President’s career, her visit to GNITS is sure to inspire and motivate young minds to grow into successful and responsible citizens of the country”.