Here is the round-up of the stupendous music events of 2022! 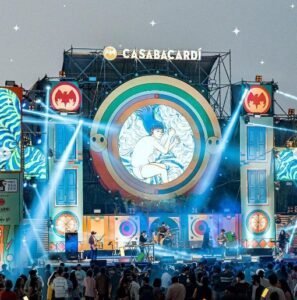 Breaking away from the shackles/mold/template/pattern of lockdown / virtual events, 2022 gave a new lease of life to the world. Unmasked after nearly two years, a nation full of music enthusiasts hit the ‘play’ button once again across clubs, concerts, and live shows. New songs topped the charts and artists across a wide spectrum of musical genres such as classical, pop, hip-hop, jazz, and others witnessed a phenomenal on-ground turnout! The year actually made it obvious that the music scene in India is hale and hearty! So, let’s check out the top Indian concerts and live shows that made the loudest noise in 2022!

Termed India’s greenest music event, ‘Echoes of Earth’ takes you on a guilt-free musical journey where one can enjoy electrifying performances spread across 4 stages, with each stage symbolizing a key element of the earth. United on the resolve to recycle and protect the environment, ‘Echoes of Earth’ is a must-go destination for every sensitized music-lover.

It is among those sensational events of India that brings both national and international artists to one stage. This musical fest host popular faces from around the globe including the best stand-up comedians, the leading DJs and whatnot. This year, it was organized in Pune in February.

Hosted in a royale castle in Rajasthan, this exotic musical fest is for those who party hard in a close-knit homely luxury and wish to live life king & queen-size This 3-day event featured artists and performers from across the globe at this royale castle.

Zee Live’s flagship property, Supermoon, has become a cultural hotbed for any and every music lover wishing to see absolutely blazing onstage acts by the hippest and most happening artists trending now. Complete with live symphonies and an ethereal experience, Supermoon has been hogging headlines with powerful international acts of Imran Khan with his Unforgettable Tour in September, tripping acts by rap king Raftaar with the Supermoon ft Kalamkaar tour, and back-to-back unforgettable melodious sojourns by national popstar B Praak of late. The recently concluded multi-city King of Hearts tour by B Praak has left fans asking for more! The brand brought many other indie artists as well during the entire year.

Organized in the mesmerizing location of Ziro Valley of Arunachal Pradesh, this eco-friendly music fest was hosted for people who celebrate cultural diversity. The event featured artists of different musical genres all in one place, letting the audience leave mundane, daily lives far behind with pulsating, groovy beats in the lap of nature.

This is a perfect musical event that is the finest blend of rich culture and modernity. Organized in the exotic location of Alsisar Mahal in Rajasthan, Magnetic Fields Festival featured performers from across the globe where culture intertwined with modern electronic music. This musical fest has all that you need for a perfect combination of urban and local musical extravaganza.

Known as one of the biggest music festivals of the year, Sunburn has raised the bar for the concerts and music fests out there. This much-awaited edition takes place in different editions across the country, acting as the hub for most of the international performances. Its Goa edition is highly celebrated!

The hustle and bustle at .FEST’s continues as over 20 thousand people enjoy the fervour