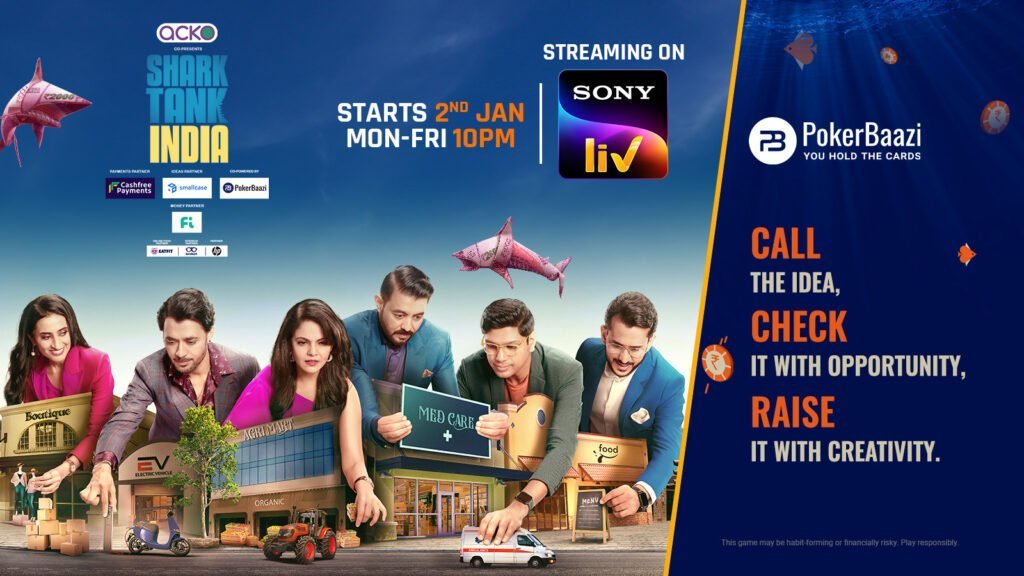 New Delhi, January 11, 2023: PokerBaazi, India’s biggest poker platform in its journey to drive the ever-burgeoning start-up ecosystem of India has partnered with Sony LIV for the Shark Tank India Season 2 as co-powered by the sponsor.

Poker is closely linked with entrepreneurship as it teaches you so much based on calculative analysis and skills. PokerBaazi has been at the forefront of leading the growth of the skill-based sport in India and therefore, this official partnership with Shark Tank India is in complete sync.

Speaking about the partnership, Mr. Navkiran Singh, Founder, and Chief Executive Officer, of Baazi Games said, “We believe that the alignment of what defines Poker as a skill-based sport cannot have an association better than Shark Tank India. In life and entrepreneurship, you need to keep making the right decisions over time and Shark Tank is one such medium that reflects the same ideology and that is why we choose to officially associate with the property.”

He also added, “We want to thank the entire team of Sony LIV who has brought a larger-than-life concept to life and showcased that anything is possible if we have a dream with the right set of skills and want to pursue it wholeheartedly.”

Ranjana Mangla, Head of Ad Sales Revenue, at Sony LIV, said, “We are pleased to associate with PokerBaazi. Sony LIV focuses on novel approaches for each of its partners to create synergies between the brand and its target audience. The show provides a highly credible environment for marketers to tell their brand stories, drive focused and clutter-breaking advertising for both emerging and established brands.”

PokerBaazi is also celebrating the Shark Tank Season on social media with several unique social media initiatives like #PokerTank which is being led by PokerBaazi Team Pro – Abhishek Goindi and Muskan Sethi. #PokerTank will be an edutainment series across the social media platforms of PokerBaazi showcasing similarities between concepts of Poker and decision-making in entrepreneurial life, helping the masses to resonate with Poker beyond the technicalities of the sport.