Discovering new drugs has become increasingly rare for independent large pharmaceutical companies in recent times. Almost 60% of new drugs are discovered through mergers and acquisitions and drug licensing. Now, researchers from Ritsumeikan University, Japan, shed light on the recent trends of spinouts from academia and investments in the U.S.A and Europe, foreshadowing a promising shift in the industry’s inter-organizational deal networks to improve research and development productivity in the future.

It is a challenging feat to launch a new drug in the market, given the low probability of success during the research and development (R&D) phase and the high costs involved. In recent times, industry trends in external innovation for drug discovery are rapidly changing. With an improved understanding of disease biology, decision-making can be more streamlined through the effective use of scientific information. 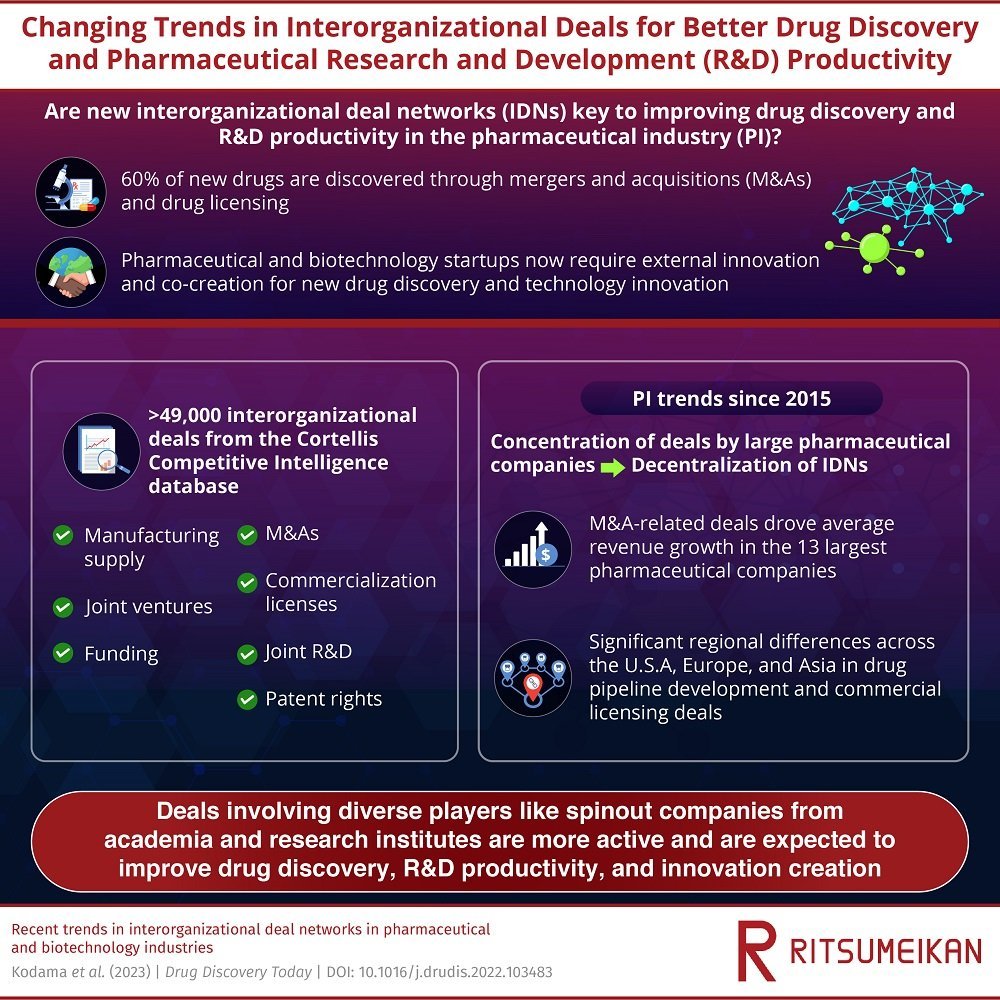 In this quest, researchers in Japan led by Associate Professor Kota Kodama of Ritsumeikan University are uncovering how the trends in inter-organizational deals in the pharmaceutical industry are changing to improve R&D productivity and drug discovery. “The network structure of innovation creation in the pharmaceutical industry has changed with the increasing emergence of start-up companies spinning out from academia and research institutions as players in the source of innovation,” explains Dr. Kodama, while discussing their investigations into these changing trends, and the results of which were made available online on 27 December 2022 and published in volume 28 issue 3 of the journal Drug Discovery Today on March 1, 2023.

Their research suggests that the knowledge necessary for breakthrough innovation in drug discovery is more often than not obtained through alliance networks. Over the past decade, large research-based pharmaceutical companies have used research collaborations, innovation incubators, academic centers of excellence, public-private partnerships, mergers and acquisitions (M&As), drug licensing, and corporate venture capital funds as typical methods for external innovation. The researchers now aim to define the changes in the network structure and nature of such alliances that have occurred over the past decade to provide future strategic insights for industry and academic players involved in drug discovery.

Using data from the Cortellis Competitive Intelligence database, the researchers identified nearly 50,000 deals of various kinds related to pharmaceutical R&D across pharmaceutical, digital health software, animal drug, and medical device companies to uncover trends in the creation of new drugs for human use. They also studied the trends of 13 of the largest pharmaceutical companies with annual revenues of more than US$10 billion, who saw an improvement in their CAGR (compound annual growth rate) since 2015. The researchers noticed that the rising CAGR correlated to a significant change in M&A-related deals after 2015, indicating that M&A-related deals drive revenue growth for large pharmaceutical companies.

Furthermore, the number of organizations involved in inter-organizational deals has been increasing yearly from 2012 to 2021. Although the number of organizations involved and the number of deals may be increasing, the density of the deal networks is decreasing annually, suggesting that networks are becoming more non-cohesive. The concentration of business relationships between organizations of certain areas in the network changed to dispersion around 2015, and new networks connecting different groups started to form after 2017. These trends are an important illustration of how the industry landscape is gradually evolving away from the traditional network in which large pharmaceutical companies drove drug discovery output. Now, inter-organizational deals among more diverse players have become active and are driving R&D productivity for startups in biotechnology and pharmaceuticals.

A clear increase in the number of academia-owned spinouts of advanced technology and expansion of investment in start-ups is a positive sign. The emergence of new chemical modalities, such as biologics, oligonucleotides, and peptides that differ from traditional small molecule drug discovery indicate remarkable changes that have taken place over the past two decades. The trend of increased financing for start-up companies in personalized drug development is beneficial for patent creation and will positively impact innovation creation in the coming years. “The presence of academia to support the technologies of these start-ups is becoming very important, and government and private support and investment in this area is boosting innovation. Our study shows that such medium- and long-term support may ultimately benefit the health and well-being of humankind,” concludes an optimistic Dr. Kodama.