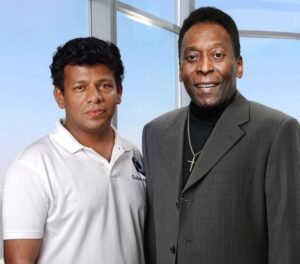 It’s really saddening news. Edson Arantes do Nascimento, well known as the legendary Pele, have succumbed to demise. He fought the disease, like all his games, but this time, he couldn’t make it. He was a true gamer, who did everything we see now in football for the first time. Apart from being exceptionally talented in his own niche, he was also a good humanitarian, and someone who could easily influence everyone he met.

Khans Media City had a great opportunity to work with him, as he was the brand ambassador of Emirates Airlines in 2014 FIFA World Cup Brazil. It was a huge Media campaign, with the presence of himself who was leading a retirement life, and Cristiano Ronaldo, who was then active. As a part of it, I could develop a strong emotional relationship with him. “While Brazil hosting the World Cup, Pele must be active.” – we strongly believe and was involved in the same. A warm reception was organized at the Pele museum. The first aircraft

of Emirates Airlines, from Dubai to Brazil – Airbus 380 bore Pele’s signature, which was a part of the promotional events, and it made into Guinness Book of World Records as well. He was a great visionary, and at the same time, a down to earth person. His impeccable records had only made him more and more humble.

Senhor, I will definitely keep the token of your love, the football you gifted me with your signature like a treasure. It was a pronounced gift that someone can ever get. You have left behind a dream, of establishing World Peace and bringing the whole population together, to a universal brotherhood through football. Our action plan of a joint venture for the same remains unfulfilled, which is a saddening fact. But I affirm that I will work for it, as a token of our brotherhood relationship.

On behalf of Khans Media City, and my personal part, I extend my heartfelt condolences to his near and dear. It’s hard to believe, but his game will never end, he will remain in everyone’s heart, like a soothing gentle breeze.

Dr. Mohammed Khan is the President of Khans Media City, who is an active presence in Media, Events, and Promotions for FIFA World Cups from 2010 to 2022 and work as a part of several global events and organizations to establish World Peace and Unity.

On the eve of Republic Day, RBL Bank pays tribute to the Indian Armed Forces

Women’s Ulitmate Frisbee Tournament to Be Sponsored by Refex Group