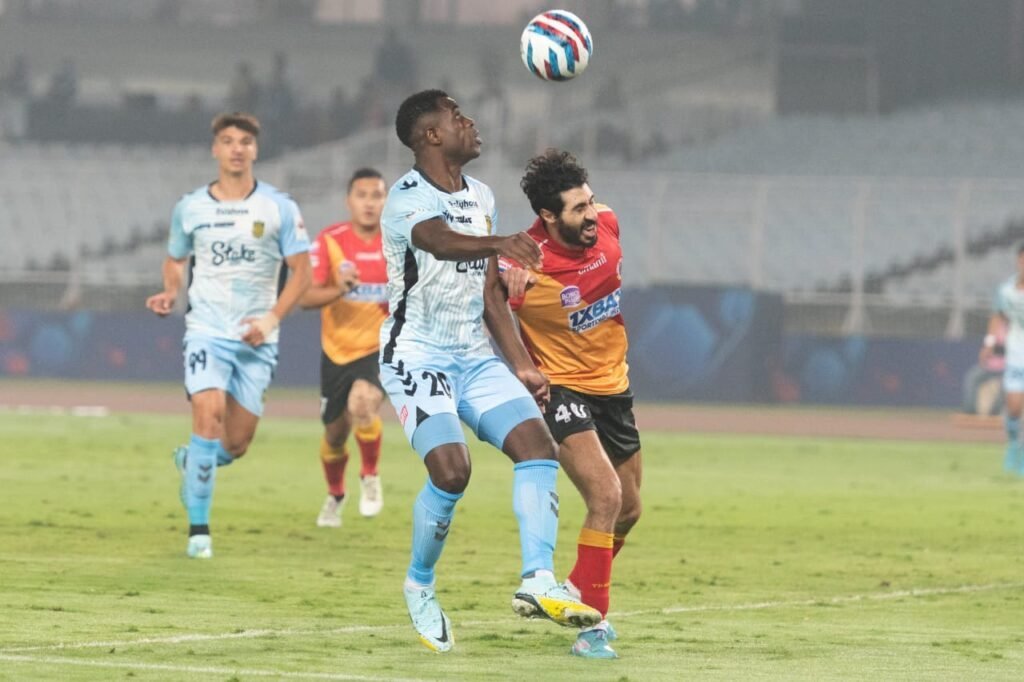 Kolkata: Hyderabad FC got back to winning ways with a strong 2-0 victory over East Bengal FC at the Vivekananda Yuba Bharati Krirangan on a chilly night in Kolkata on Friday.

Javi Siveiro (9’) and Aaren D’Silva (90 +4’) registered a goal apiece as Hyderabad moved back to within four points of league leaders Mumbai City, with 35 points after 15 games.

It started with Siverio’s impeccable header at the end of a 10-minute spell that Hyderabad dominated from kick-off. It was Borja with a superb ball that Siverio headed in with style as Hyderabad scored their first-ever goal at the Salt Late Stadium.

The hosts had a couple of half-chances, and also hit the bar but Odei Onaindia, Nim Dorjee Tamang, Akash Mishra, and Nikhil Poojary stood strong while Gurmeet Singh pulled off some big saves as HFC went into the break with a lead.

Siveiro, Bart Ogbeche, Rohit Danu, and Odei Onaindia also had chances at the other end but it was East Bengal who came out for the second half with lots of purpose.

Gurmeet Singh was under pressure but never wilted as he hung on to his clean sheets with a series of fine saves and interceptions. Kamaljit at the other end was equally impressive, making three crucial saves that HFC should have scored form.

And the deal was sealed when Aaren D’Silva, who came off the bench, to score late in the game. Aaren took his time and made sure that Kamaljit Singh could not save what was his first goal in his Indian Super League career.

Nim Dorjee was named the ‘Hero of the Match’ as Hyderabad put on another impressive display to get back to winning ways.

Hyderabad are back in action when they take on league leaders Mumbai City FC in much-awaited ISL clash at the Mumbai Football Arena on Saturday, February 5.

FC Goa sign Hernan Santana for the remainder of season