Non tech jobs could be at the forefront for job recovery in 2023: Indeed

Bengaluru, 13 January 2023: New findings from the world’s no1 jobs site, Indeed, showcases the job roles that saw the biggest growth and decline in 2022.

Ever since the pandemic, tech roles have been on a rise, with even new-age roles like web3, blockchain, cloud, and security gaining prominence. However, as the effects of the pandemic relatively subsided in 2022, we saw a return to normalcy in sectors like BFSI and healthcare. The largest increase in jobs was seen for the role of a loan officer with a 295.7% change in the share of jobs. Bank officer (201.6% change) was another role in the same sector that saw a tremendous increase.

Roles in healthcare and allied fields also saw an increase in jobs in 2022 with radiologists, pharmacists, and dentists showing an increase of 162.5%, 156.1%, and 133.2% respectively. In addition, roles like receptionist (248%) and electrician (130.5%) also grew exponentially.

The decline in tech roles 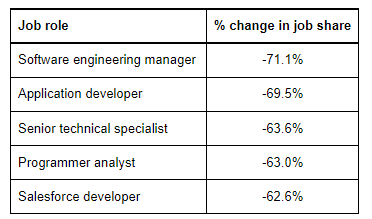 Sashi Kumar, Head of Sales, Indeed India said, “In 2022, we saw a significant increase in non-tech roles, given the relative return to normalcy in various sectors and we expect them to be at the forefront in job recovery in 2023. Additionally, we foresee the growth of gig roles as well, with Indeed’s data showing that a 9-11 million strong gig workforce is in the making in the next three years. Tech roles are currently on a downward trend given that global technology companies are hiring cautiously due to the various economic shifts. However, in 2023, India will still see a demand for tech roles, especially in areas like 5G and telecommunications, given India’s progress in this space. ”

Overall, while employers were cautious in hiring in 2022, job postings on Indeed in December 2022 were well above their pre-pandemic baseline (February 2020) by 181%. Looking ahead into 2023, employers are in fact optimistic about their hiring activity – with 45% of employers surveyed by Indeed foreseeing up to a 20% increase in hiring.

Candere By Kalyan Jewellers Launches Their Valentine’s Day Campaign “Will You?”