Mumbai, 24 December 2022: REPRESENT, a 360° talent management agency that boasts an eclectic roster of India’s most prominent artists alongside next-gen icons, witnessed an extraordinarily eventful year – one that establishes it as a pivotal part of the music fraternity and a significant driver of the pop culture.

The company set itself apart from its contemporaries by expanding from artist management to label services, brand consultation, creator management, and angel investing through its venture arm. REPRESENT has already completed 3 investments in pop-culture-relevant businesses and is launching its first D2C consumer brand with its own artist in January 2023. 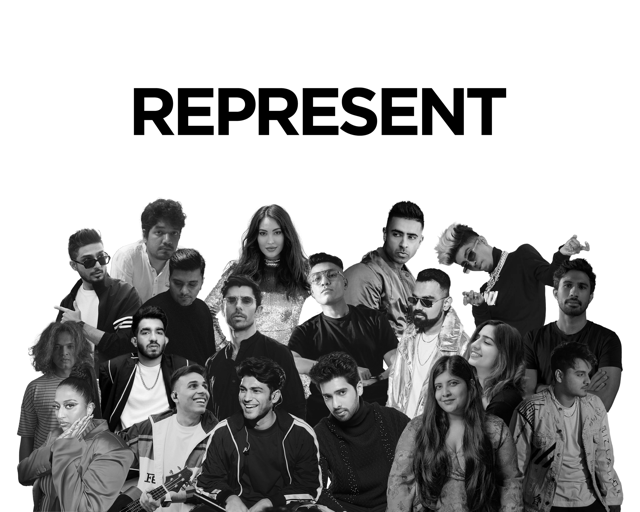 2022 started off with the company becoming independent in April after being incubated under one of the country’s biggest music streaming platforms since its inception in 2019. Following its solo advent, it grew the artist lineup to 18 by signing incredible artists namely Ananya Birla, MC Stan, Raja Kumari, Raman Negi, Savera, Jai Dhir and OAFF. RE:PLAY, the agenting division, was set up to focus on live entertainment and events for its in-house artists plus other independent artists such as KING, Darshan Raval, and Jay Sean to name a few.

The year brought about one of the biggest music collaborations; Armaan Malik featuring on Ed Sheeran’s song ‘2 step’ – giving rise to a truly iconic moment in Indian music. Armaan and Hanita Bhambri were also featured on the eminent Times Square billboard for Spotify’s World Mental Health Day campaign along with the likes of J Balvin and Hayley Kiyoko. ‘KTMBK’ by Zaeden and Hanita Bhambri got synced in ‘Mismatched Season 2’, redefining the scope of independent music. In terms of streaming numbers for the year, over 1.2 billion streams were clocked on Spotify across 80+ releases, leaving an unmissable mark in the music industry.

Taking a look back at the year, Aayushman Sinha, Founder and CEO, REPRESENT said, “2022 has been a great year for music. With the live events making a comeback this year and independent artists being further appreciated for the music they make, it has given companies like ours an impetus to create and deliver as much value for our artists as possible. Using an artist-first attitude and a drive to keep pushing the envelope further, I’m so proud of how far REPRESENT has come as a company today. This year we have been able to deliver some outstanding work for all our artists, with each witnessing a minimum 2x increase in their Spotify Wrapped data. Moreover, 20% of the top Independent songs of 2022 were by artists managed by us.”

Taking a deeper dive into the world of statistics; MC Stan, the 22-year-old rap prodigy, who is currently a contestant in Bigg Boss, crossed over 5 million followers on Instagram, 220 million+ streams on Spotify, and more than 520 million views on his YouTube channel. Singer-songwriter Jai Dhir came into the public eye with his Punjabi rendition of ‘Kesariya’ which went viral on the internet and was later released officially by Sony Music India. Moreover, the year also witnessed several of the artists’ music trend on social media such as ‘Gul’ by Anuv Jain, ‘Tu/You’ by Armaan Malik, and MC Stan’s album ‘Insaan’.

On the live music front, the exclusive artists collectively pulled off more than 500 shows this year in India and across the world including a sold-out 10-city DJ Chetas tour. Some other highlights included Zaeden’s packed debut in London, Anuv’s performance at a show in Delhi that sold over 20,000 tickets, Armaan’s first-ever India tour and them featuring with Ananya Birla as well as KSHMR at the Post Malone Zomato Feeding India concert held in Mumbai recently.

Aayushman further added, “As 2022 comes to a close, we are really excited as a company to create newer avenues for growth and provide services that exceed expectations of our artists in 2023. I’m truly grateful to be surrounded by an incredible team of business heads leading and co-building our vision with us.”

The in-house artists were the prime choice of 100+ global brands like Bumble, Meta, Dell, Johnnie Walker, and Maruti Suzuki Nexa. Armaan Malik and Zaeden also collaborated with H & M India on the launch of the brand’s 2022 Linen Collection as well as their festive collection in the “Brighter Than Ever” campaign respectively. Armaan and Lost Stories delivered the biggest brand anthem of the year ‘Memu Aagamu’ featuring the legendary south superstar Allu Arjun, a project that was executed end-to-end by REPRESENT.

REPRESENT has an exciting 2023 planned ahead with a creator management vertical, D2C brand in the works, systematic music distribution ecosystem, independent festival IPs, SAAS solutions for artists, and an education platform in the pipeline for music business enthusiasts.