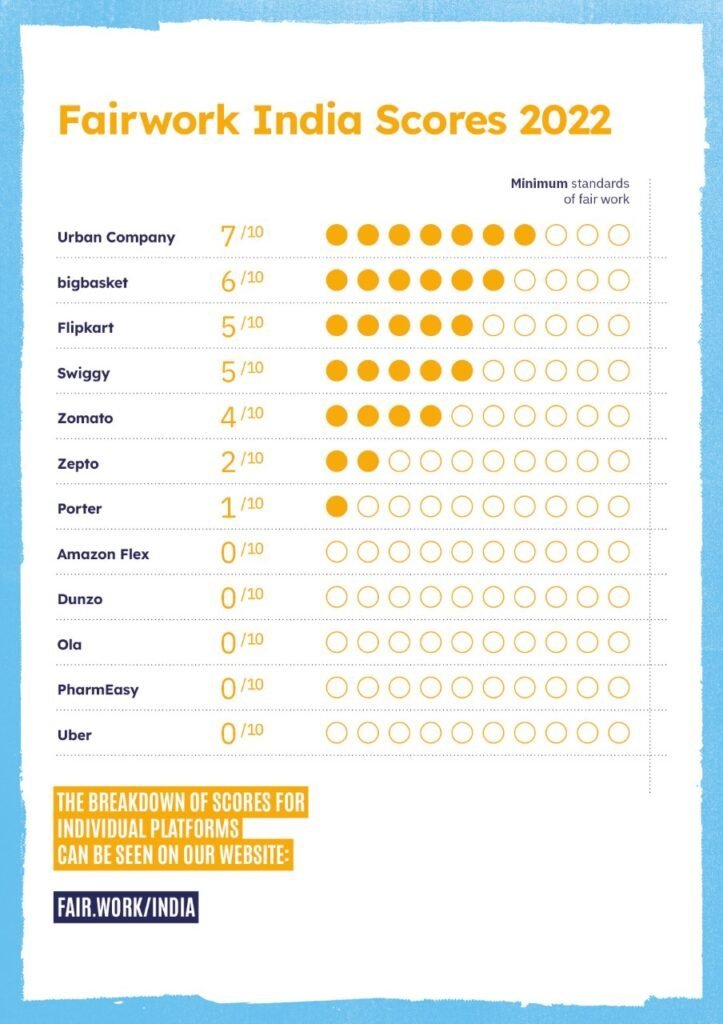 Bengaluru, India, December 27, 2022 – The Fairwork India Team, spearheaded by the Centre for IT and Public Policy (CITAPP), International Institute of Information Technology Bangalore (IIIT-B), in association with Oxford University, presents the Fairwork India Ratings 2022: Labour Standards in the Platform Economy report. This report examines the work conditions of platform workers on digital labour platforms in India. It evaluates 12 platforms offering location-based services in sectors such as domestic and personal care, logistics, food delivery, e-pharmacy, and transportation, in India.

This year, the report is structured around the theme of flexibility, which is often portrayed as a crucial dimension and benefit of platform work. “The promise of the flexibility of the digital platform economy raises as many questions about livelihoods as it offers opportunities. We hope the Fairwork report provides the basis for an interpretation of flexibility that allows for not merely the adaptability that platforms seek, but also the income and social security that workers lack”, said Professors Balaji Parthasarathy and Janaki Srinivasan, the Principal Investigators of the team, along with researchers Mounika Neerukonda, Amruta Mahuli, Bilahari M, Damni Kain and Pradyumna Taduri in India.

Fairwork assessed platforms against five principles: Fair Pay, Fair Conditions, Fair Contracts, Fair Management, and Fair Representation. Each principle is broken down into two points: a first point and a second point that can only be awarded if the first point has been fulfilled. Every platform receives a score out of 10. Platforms are only awarded a point when they can sufficiently demonstrate or commit to the implementation of the principle. Through a combination of desk research and worker interviews conducted in Bangalore, Delhi, and Kochi, and, where possible, from the evidence provided by the platforms, the Fairwork India Ratings 2022 scores 12 platforms, including Amazon Flex, BigBasket, Dunzo, Flipkart, Ola, PharmEasy, Porter, Swiggy, Uber, Urban Company, Zepto, and Zomato. This year, no platform scored more than seven out of the maximum of ten points, and none scored all the first points across the five principles. Key findings by principle are below

1.  There are two highlights to this year’s findings. Firstly, the same three platforms that scored the first point for Fair Pay last year scored a point this year too. No other platform publicly committed or provided sufficient evidence, to ensure that workers earn at least the hourly local minimum wage after work-related costs. Even with workers and worker groups repeatedly emphasizing the importance of a stable income for platform workers, platforms have been reluctant to publicly commit to, and operationalize a minimum wage policy. Secondly, while workers have engaged in various forms of collective action to voice their concerns in the platform economy, platforms have been uncompromisingly unwilling to recognize or negotiate with any collective body representing workers.

2. This year, bigbasket, Flipkart, and Urban Company implemented and operationalized policies to ensure that all workers on these platforms earn at least the hourly local minimum wage after factoring in work-related costs. No platform made the second point which requires platforms to commit or provide sufficient evidence that workers earn at least the local living wage after work-related costs.

3. bigbasket, Flipkart, Swiggy, Urban Company, and Zomato were awarded the first point under Fair Conditions for simplifying their insurance claims processes and for having operational emergency helplines on the platform interface. Only bigbasket, Swiggy, and Urban Company were awarded the second point for implementing a loss-of-pay policy that provides workers with a financial safety net during medical illnesses.

4. Seven out of twelve platforms were awarded the first point for Fair Contracts. bigbasket, Flipkart, Swiggy, Porter, Urban Company, Zepto, and Zomato were awarded this point for ensuring the accessibility of their contracts and implementing a notice period before changes are made. Additionally, Flipkart, Swiggy, Urban Company, Zepto, and Zomato, have modified their contracts to reduce the asymmetry in liabilities and have added a clause for dispute resolution between workers and platforms, and hence met the second point under Fair Contracts.

5. bigbasket, Flipkart, Swiggy, Urban Company, and Zomato were awarded the first point for Fair Management for having a grievance redressal process with the option to connect with a human representative of the platform. There was sufficient evidence only from Urban Company to meet the second point for the principle. It instituted regular, external audits to check for biases in its work allocation systems, in addition to adopting policies against the discrimination of its platform workers.

6. Representation through a collective body or trade union is a vital dimension of fairness at work. It is disconcerting that despite the rise in platform worker collectivization across the country, like last year, there was insufficient evidence from any platform to show willingness to recognize a collective body of workers. Consequently, no platform could be awarded a point for this principle.